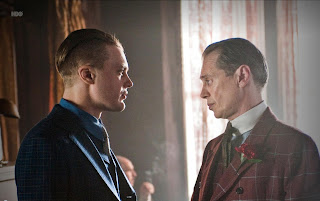 First, I can't believe what happened to Jimmy.

Second, I don't believe if Margaret Schroeder were a real person (not a fictional character) she would sign over her wealth to the church.  That just seemed a bit much.

I think this is why I don't watch much television.  I don't like getting invested in characters and then the writers messing them up.
Posted by P.A. at 10:05 PM