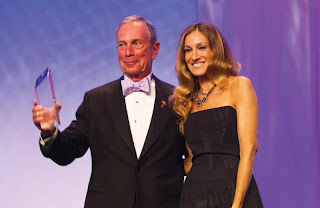 "This is not a partisan issue.  Marriage equality is fundamentally consistent with both parties' principles, and especially, conservative principles.

"This about it: Limiting the intrusion of government into family affairs, promoting family stability, keeping government out of private contracts between consenting parties..."

-New York City Mayor Michael Bloomberg during his address a the HRC's National Gala, where he was honored for his leadership on the marriage equality win in New York.  Sarah Jessica Parker introduced Bloomberg at the annual celebration.
Posted by P.A. at 5:01 PM