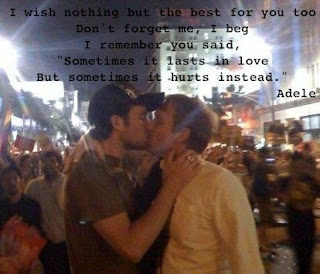 You can read it in The Advocate or The Dallas Voice.  This weekend our friend Del posted the following note on his Facebook page:

It saddens me to inform you that Jason Dottley and I are divorcing.

I will always cherish the almost ten years that we were together -- married for eight, legally for three. Jason was a wonderful husband to me and a great step-father to my daughters. I will miss being his husband.

Jason and I both fought hard for marriage equality, and I will continue to fight that fight until gay marriage is legal nationwide. Our divorce only proves that like straight people who have the right to marry and divorce, we are all equally human.

I know we are going to disappoint a lot of people and for that, I am truly sorry. But I will never feel that we failed, and I have no regrets. This was not what I wanted, but I must now accept what Jason wants. I only wish him the very best and will celebrate his continued success.

I've had lots of losses in my life, and I've found that I heal when I turn to my pen, my writing and my work. I promise you more twisted stories, that will make you laugh, think and maybe shed a tear
or two.

I welcome any words of support, but this is so hard, and privacy is important to me and my daughters during this difficult time.

I thought Del very eloquently points out that like straight people gay people are equally human, and we deserve the right to marry and divorce.

Del and Jason's wedding was the first gay wedding I ever attended.  I was inspired. They were at our wedding three years later.  Del married us.  Earlier this month they were at our home celebrating with us, it was a great party with friends. Last week their marriage came to an end.  I'm sad for them.  I'm sad for Del.  This divorce is a terrible reminder that when one person wants out of a marriage there is nothing the other person can do. Nothing! (That truth haunts me a little bit.)

Sing it Adele: "Sometimes it lasts in love but sometimes it hurts instead."
Posted by P.A. at 7:15 PM