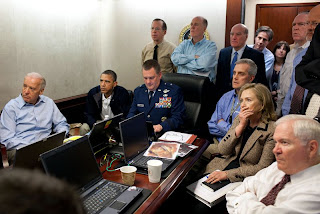 Almost ten years later, I still think about the victims of September 11, 2001 several times a month.  (Maybe it's because my husband travels all the time for business?)

When I woke up and learned that the mastermind behind 9/11 was killed by United States special forces I was surprised at how happy the news made me feel.  It just never seemed right that Osama bin Laden was still living his life when he killed so many people.
Posted by P.A. at 9:01 PM