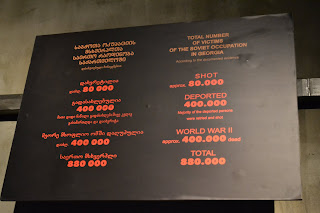 Not to make light of history, but it appears that Russia is the original "frenemy."  Georgia deserves an enormous amount of respect just because they haven't been swallowed up by Russia completely.  Georgia still has its own country, its own language, and its own culture, which is unbelievable if you learn a little bit about their history.  In the late 1700's the Georgian King signed a treaty where he promised to dissolve the Georgian monarchy IF Russia promised to protect the country from the invading Turks.   I think Russia protected them- eventually.

I'm most unsettled by the facts I learned at the Soviet Occupation of Georgia 1921 to 1991 museum.  It reminded me of the Holocaust Museum in Washington, D.C.  If you were an educated Georgian in 1921, then you were shot and killed by the Soviets.

But Georgia has survived and now they are thriving even though they have an unkind neighbor.
Posted by P.A. at 1:44 PM