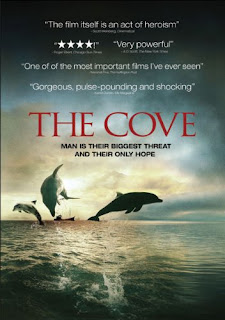 I first learned about The Cove on the night it won the Academy Award for best documentary. It is a documentary film about the capture of and the killing of dolphins in Japan. My heart aches at the subject matter of this film. It just seems terrible that we are doing this to dolphins. Oprah's Earth Day show had a segment with the makers of this film and one of them said that dolphins are the only animal on record to single handed save a human life. It's our turn to save theirs.

I encourage you to be brave and watch this film, The Cove. Also, visit this website: www.SaveJapanDolphins.org to learn more.