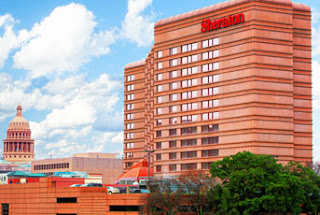 Last weekend in Austin we had to hunt to find a place to stay for Saturday night.  One night only! We finally found a room at the Sheraton in Austin.  The lobby was nice, but the rooms were dated with popcorn on the low ceilings, outdated bathroom design, the uncomfortable bed....and the thin walls.

I also had flash backs to my senior year in undergrad when I lived with Missy off Far West in Austin.  We had a large (affordable) two bedroom apartment...with thin walls.  We had noisy neighbors that sent screams and moans our way at all hours of the day.  Eventually, the sound was so frequent that I didn't notice it..they were just part of the apartment.  It was always funny when friends would come over and they'd ask: what's that?

Me: That's the sound of Martha (Fauker) snoring?

Guest: Not that.  Do you hear that?

Me: (listening) Oh, that's the sound of the neighbors having sex.  Don't worry, they are noisy but they don't last long.