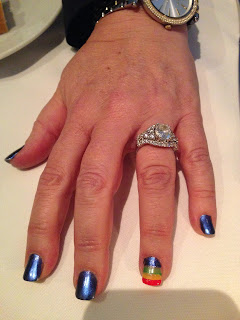 My parents still live in my hometown of 5,000 people, which means it was significant when my mother showed up to the airport with her wedding ring finger nail painted rainbow in honor of our legal same-sex marriage weekend.  I had to ask my mother if she got her nails done at Patti's?" She replied with a YES.   (I mean where else would she get her nails done?) 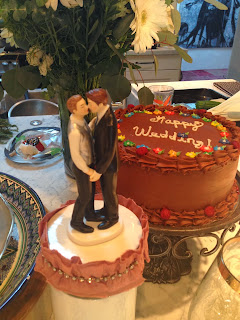 Our weekend was practically perfect in every way.  My parents, my husband's parents, my husband's aunt and uncle, and the two of us rented a house in Santa Barbara, CA where my husband's sister and her husband live with our nephews.  Our dear friend Del (who's like a brother to us) officiated our wedding in Texas in 2006, and since he lives in Los Angeles he drove up with his new beau Mark to Santa Barbara to officiated our legal wedding.  My brother and his wife were unable to make the fast weekend, which was okay because (as Cousin Kate said best:) our wedding was official in 2006 and this was making it legal.  We we're not having another wedding.  We were just getting the legal part of our wedding that was missing in 2006.  We had matching shirts and rainbow underwear... 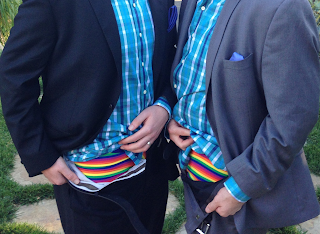 We caravanned to one of the most beautiful buildings in the world, the Santa Barbara courthouse, and we married in the grassy lawn under the clock tower.  It was perfect.  We hired a photographer, and I cannot wait to see the photos.  When we returned to the house a chef was in the kitchen cooking our meal.  The group shared a steak and scallop meal together.  My husband's father gave a great toast before dinner. We told stories.  We laughed.  We celebrated together.

The event felt much bigger than I intended.  It was lovely.  I've known my husband for a decade.  We had a big fat gay wedding in 2006, and getting the legal part of our wedding was important to me, but I didn't think it would hit me like it did.  It was amazing.  We are legally married.  Our relationship is equal to, not less than, your marriage.

We are married!  Legally.  It's still amazing to me.

My husband and I are two of the luckiest people.
Posted by P.A. at 7:17 AM