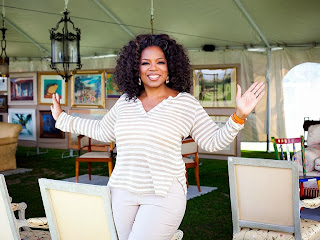 I learned after the fact, that on the day my husband and I were standing in the sunken garden of the Santa Barbara courthouse getting legally married one of my best friends Oprah (we've never met) was having a garage sale at the Santa Barbara Polo & Racquet Club in Carpinteria.  I'm not saying I would have delayed getting legally wed to attend Oprah's garage sale, but I might have found a little time in the day to bid on her stuff.  As you know, I don't have enough "stuff" in my life.

The house we rented was very close to Oprah's Montecito ("The Promise Land") estate, which means Oprah and I most likely breathed the same air this weekend.  Amazing.

One of the reasons I have such love and admiration for Oprah is that she championed gay rights long before the momentum shifted in favor of equality for all.  As far as I'm concerned she deserves every good thing in her life.
Posted by P.A. at 7:33 AM