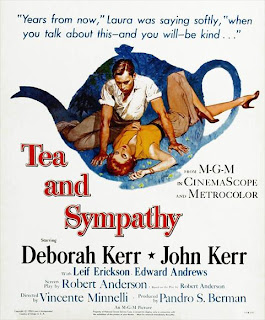 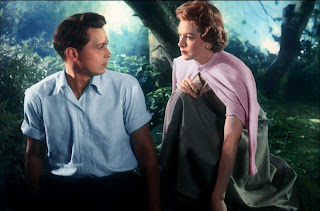 This week, while in my hotel room working, I stumbled across Tea and Sympathy on TCM.  I was shocked that this film from the early 1950's had such a strong homosexual theme.  I was actually surprised an audience from that era would watch such a film, but it's edginess was captivating, still.  A boy is tormented for being different at his boarding prep school.  He has an overbearing father, that is embarrassed his son's nickname is "sister boy."  The boy tries to prove his manliness by visiting a prostitute but fails.  Eventually, the boy falls in love with the high school coach's wife.  Shocking.
Posted by P.A. at 9:01 AM