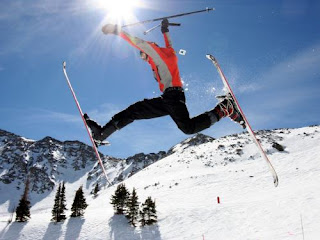 I did not think this through.  In August my husband and I planned a ski trip for February.  Also, in August I started looking around for my next career move.  (I'm trying to climb the career ladder.  Trying.)  At the time I thought there was no way (Jose) I'd still be at my current job six months later.  I didn't tell anyone about the week I needed off from work to go skiing in February.  Guess what?  I'm still here.  Next month is February.  I've got a ski trip planned.

I thought about playing the "I-thought-I-told-you" card  or just playing the "I-told-you-and-you-forgot" card.  But it just seemed dishonest.  I was going to go with the "we-go-skiing-every-year" card while pretending like it's no big deal, but at the last minute I couldn't help myself and I told the truth.  I blurted out the "when-we-planned-this-trip-I-wasn't-expecting-to-still-be-here-but-I-need-this-week-off" card.  Guess what?  The truth worked.  It made my boss laugh too.

This proves, once again, there is nothing wrong with the truth.
Posted by P.A. at 9:31 PM