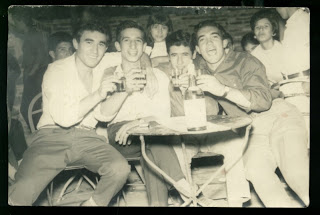 We're an emerging group.  Hooray!  There are more people like us!  According to this article; last year, 131,729 gay couples reported to the United States Census Bureau that they're married.  The article also points out that the tally of married gay couples is higher than the actual number of legal marriages, civil unions and domestic partnerships...the actual number of legally recognized gay partnerships in the U.S. is around 100,000.

After our wedding in 2006, my husband and I considered ourselves married.  He is my husband.  I'm insulted when people call him "my partner."  Our relationship is not less than any other married couple despite the fact that we live in a city, county, state, nation that does not grant us equal rights.  We might not be able to "legally" get married, yet, but we count ourselves as married nonetheless.

I think all 131,729 gay married couples in the U.S.A. should get together and hang out.  It'd be nice to know my fellow married homos.