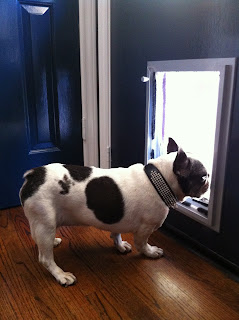 I am very much attempting to not be dramatic when I think about my aging girl; however, if I'm being completely honest with myself, then the thought of Martha Fauker's death is devastating. We know dogs (like humans) are mortal beings, but even though logically I've always known I'd outlive Martha Fauker it doesn't make this any easier. The last two months Martha Fauker has really started to show her age. I rescued her when she was about five-years-old in May of 2002, and she's had a good life ever since. Any time I get sad I start to think of all the fun we've had together. She is my pretty, pretty princess.
Posted by P.A. at 1:07 PM