God loves everyone. Carl Paladino does not. 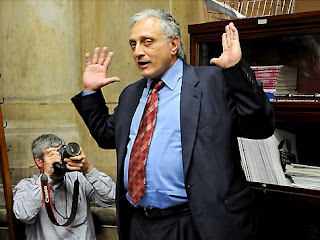 Did you read the New York Times this weekend? Did you read about how the Republican candidate for New York governor, Carl Paladino, said the following in a speech:

“That’s not how God created us,” he said, reading from a prepared address. “I just think my children and your children would be much better off and much more successful getting married and raising a family, and I don’t want them brainwashed into thinking that homosexuality is an equally valid and successful option — it isn’t.”

First, I'd like to say that if God didn't create me, then who did?!

Second, I would like to welcome the straight people to our world...and for a moment consider when was the last time a candidate for governor gave a speech publicly stating that you are not valid? Unless you are a minority, you've probably lived your entire life without hearing or reading about someone bashing you. This is what it's like to be a homo living in a straight world; every day somewhere on the Internet I can find proof of people promoting the idea that gays are less than their straight counterparts. I am gay. My husband is gay! We have college degrees, successful careers, an exceptional family, and an abundance of friends. We're two smart men, and we can handle it when publicly people state that gays are second class citizens. Not everyone can handle being gay in a straight world...

The Dallas Voice is reporting the following: "A 19-year-old gay man from Oklahoma has taken his own life, and his parents say a hate-filled recent City Council meeting he attended may have driven him over the edge."

What if you had a gay son or daughter? What kind of world would you want your child to live in? If you're okay with life as we know it, then continue to do nothing. If you're not satisfied with our society and you know, as I do, that we can do better as a nation, then the next time you witness a derogatory word spoken about gays- speak up. We are all God's children. We all deserve to live life without being told that you are less than equal.

I maintain this blog to show proof that my life as a gay man married to another gay man is just as ordinary and wonderful as your life. We are two men that love each other just as much as you love your spouse. We're just like you. We're your equals; nothing more, and certainly nothing less!
Posted by P.A. at 9:17 PM