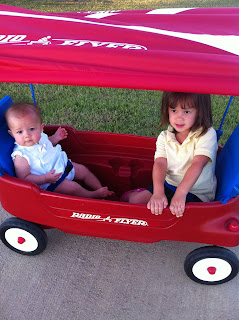 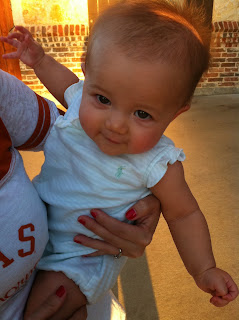 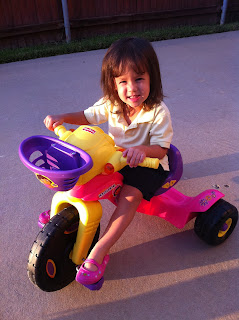 On Friday after work I got to hang out with Presley, Paxten, my brother and his wife. My brother asked Presley what was my husband's name, and she without hesitation correctly said the name of my husband. I was touched.

My brother went to an alumni UT rugby event, while his wife and I spent some quality time with their daughters. We ate fajitas, went to the park, and just hung out. My brother's wife was called away to a neighbor's house, and as a result for (an epic) ten minutes I had both the girls.

During those ten minutes Presley had to go "poo poo on the potty," and Paxten was no longer happy without her mommy. I had to set Paxten down while I attended to Presley, which was not what Paxten wanted. After Presley coached me on the correct way to wipe her bottom, she became upset that I could not put Dora on the television. I was looking for Dora DVD's, and I didn't think to look for Dora on the DVR. Doh! Paxten was happy again, but Presley was not happy without Dora. I negotiated with Presley on what we could watch instead of Dora. She did not like Snow White, and it was rejected, however, she likes 101 Dalmatians and so I put it on the television. Both girls were happy. Soon after their mommy came back from next door...

While Paxten was fed and put to bed by her mommy, I was supposed to get Presley in the bathtub. The next issue was that Presley did not want to take a bath until she finished 101 Dalmatians, but we were only twenty minutes into the film. Doh! I took the path of least resistance, and I kept watching 101 Dalmatians with Presley. That was a great idea until their mommy walked into the room and asked what was I doing?! "Why is Presley not in the bath?" was the question that was asked of me. In my defense, I said: "she didn't want to take a bath." I got a look from the mom in the room. I then got to watch a skillful mom in action as she talked Presley out of her devastation at the television being turned off.

Presley had her bath, I read her one book, and then I kissed her goodnight while her mommy finished reading her bedtime stories. As I walked out of the room I heard Presley ask her mommy if I was going home to see my husband. I was touched.
Posted by P.A. at 8:43 PM