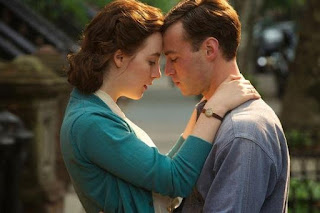 You get to watch a lot of movies when you have tiny humans that eat every three hours in your household.  We're in a feeding, about to feed, or just fed nonstop cycle.  Since the film Brooklyn received 97% approval rating on Rotten Tomatoes I rented it a few nights ago, and it was the most delightful film.  I don't want to over sell it, since it's really just a simple love story; however, you must see this film.

The actors performance is captivating; there are many sweet subtle moments in this film.  I hope to see many more films with actors Saoirse Ronan and Emory Cohen in leading performances.  Great talent always uplifts my spirits.

Here's a quote from the film, which made me weepy with a baby in my arms at 3:30 in the morning.

"You'll feel so homesick that you'll want to die, and there's nothing you can do about it apart from endure it. But you will, and it won't kill you... and one day the sun will come out and you'll realize that this is where your life is." - Eilis Lacey, Brooklyn
Posted by P.A. at 1:04 AM