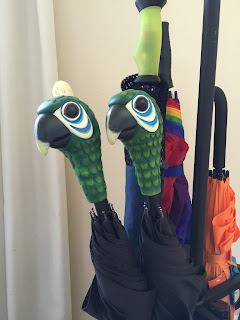 This is a first world problem: we've got nanny issues.  My husband and I are 0 for 3 in getting a nanny candidate to show up for an interview.  We still have 5 weeks before the twins are scheduled to arrive, and we're planning to take the first 12 weeks off from work to tend to our babies; however, since neither one of us plans to retire from work, we will need a full time nanny.

We've started socializing that we're looking for a full time nanny candidate with our friends and neighbors that have nannies.   We are delaying using an agency, since nanny agency fees are significant.

Yesterday, Nanny Candidate No. 3 called one hour before her scheduled interview and canceled,  She told me she felt terrible, but she's a Christian woman and she didn't think it was best for her to work in a two dad household.  She said a nanny is an extension of the parents and our values are not aligned, yadda, yadda, yadda.  She apologized three times and told me she felt terrible two times before I cut her off and thanked her for the call.

Last week Nanny Candidate No. 2 called one day before her scheduled interview and said she thought about our family and didn't think we were a match.

Last week Nanny Candidate No. 1 called and said our two houses were 28 miles apart and she didn't want such a long commute.

Now I'm starting to understand why nanny agency fees are so high.  It takes work to find a nanny.  But I'm really hoping our nanny will float down from the sky and stay until the wind changes.
Posted by P.A. at 9:34 AM