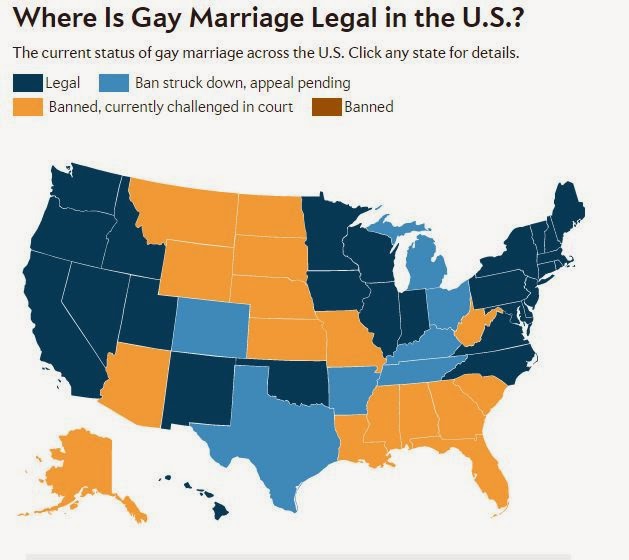 This has been a busy week in the continued fight for equality for all, equality for even the gay Americans!  I'm glad those nice guys at The Slate created an interactive map titled Your Guide to the Gay Marriage Fight to help us keep up with the facts.

As you know, my husband and I had a wedding in Austin, Texas on May 13, 2006 in front of our friends and family, and my husband and I were legally married in Santa Barbara, California on November 2, 2013.  It's been an adventure.

Equality is important - for us and for the future generations.

We have a neighbor who's a few years older than us and he was once (I think in the 1980's) fired from a job because his employer discovered he was gay.  He rallied.  He has a husband and two beautiful daughters - and he is our neighbor, which is a reward in itself!  I have not been fired for being gay; in my professional career to date two of my three employers found my diversity to be an asset; the other employer was indifferent, which is a victory in its own way.

One day it will be hard for us to remember a time when gay people didn't have equal rights.  We're not there yet, but we're getting close.