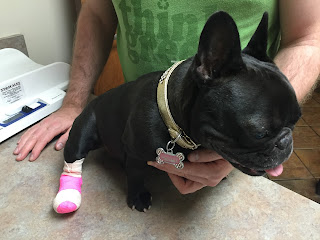 We came home from the pediatrician with the two legged children on Tuesday and Matt Damon, our 9 month old four legged son, could not stand and would not move.   I was hysterical.   One emergency vet visit and rounds of X-rays later it was determined that he had a slipped disc in his back.  He was put on a five-pills-two-times-a-day routine in addition to bed rest for one week.  Four days into the routine and it appears to be working - he's acting well now and he doesn't understand why we're keeping him locked down most of the day.  He gets out of doggie jail on Tuesday.

On Saturday morning Dooley, our 6 year old four legged daughter, ripped a back claw out of her foot.  We don't know how it happened, but the incident might have occurred when she was defending our house from the exterminator who was outside treating our house for bugs.  I was sleeping and my husband was juggling twins and a big bloody crime scene created by Dooley.   How much blood could she possibly pump out of her paw?  Luckily for us, my husband's parents arrived to take care of the two legged babies while we went to another emergency vet appointment; the second emergency vet appointment of the week.  No worries though, Dooley is going to be fine.

It's been an exciting week with bulldogs, and I'm so thankful for our vets.  I know they are thankful for us and the wealth transfer we have initiated from our bank account to theirs.  It's all worth it.  To me.  I love our dogs!

The key takeaways for the week: 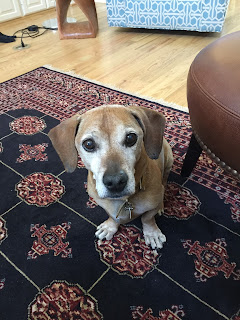